Nonagenarian Kongorpilly Parameswaran Namboothiri’s life is devoted to the mridangam. For over 50 years, he has been practising, performing and perfecting his art. At 91, living with his daughter in Parali, Palakkad district, Parameswaran Namboothiri is still fascinated by the magic of the mridangam and teaches it to a group of dedicated disciples.

In his long musical career, Parameswaran has accompanied many veteran musicians including Chembai Vaidyanatha Bhagavathar, D.K. Pattammal, L. Subramanyam, K.B. Sundarambal, Madurai Somu, T.N. Seshagopalan and S. Kalyanaraman. He played an active role in organising the yearly Guruvayur Sangeetholsavam (music festival), which is now popularly known as the Chembai Sangeetholsavam, conducted in honour of Chembai at the Guruvayur temple.

To pay tribute to the mridangam vidwan, Kerala-based artiste Gireesan Bhattathiripad has written and directed a documentary titled Abhivadaye.

To be released on July 24, the one-hour documentary traces mridangam vidwan Parameswaran Namboothiri’s musical journey. “It is a gurudakshina offered to him by his disciples and well-wishers,” says Gireesan, who took two-and-a-half years to complete the project.

Gireesan took Parameswaran to Poomully Mana, in Peringode, Palakkad district, the place where he was initiated into music. Poomully Mana, known for its connoisseurs who encouraged art and artistes, has hosted musicians including M.S. Subbulakshmi, T.R. Mahalingam and Hindustani classical musician Sarathchandra Marathe to name a few. It was here that Parameswaran met Chembai, and the two became best friends. Soon after that, Parameswaran would travel with Chembai, performing with him at every concert. 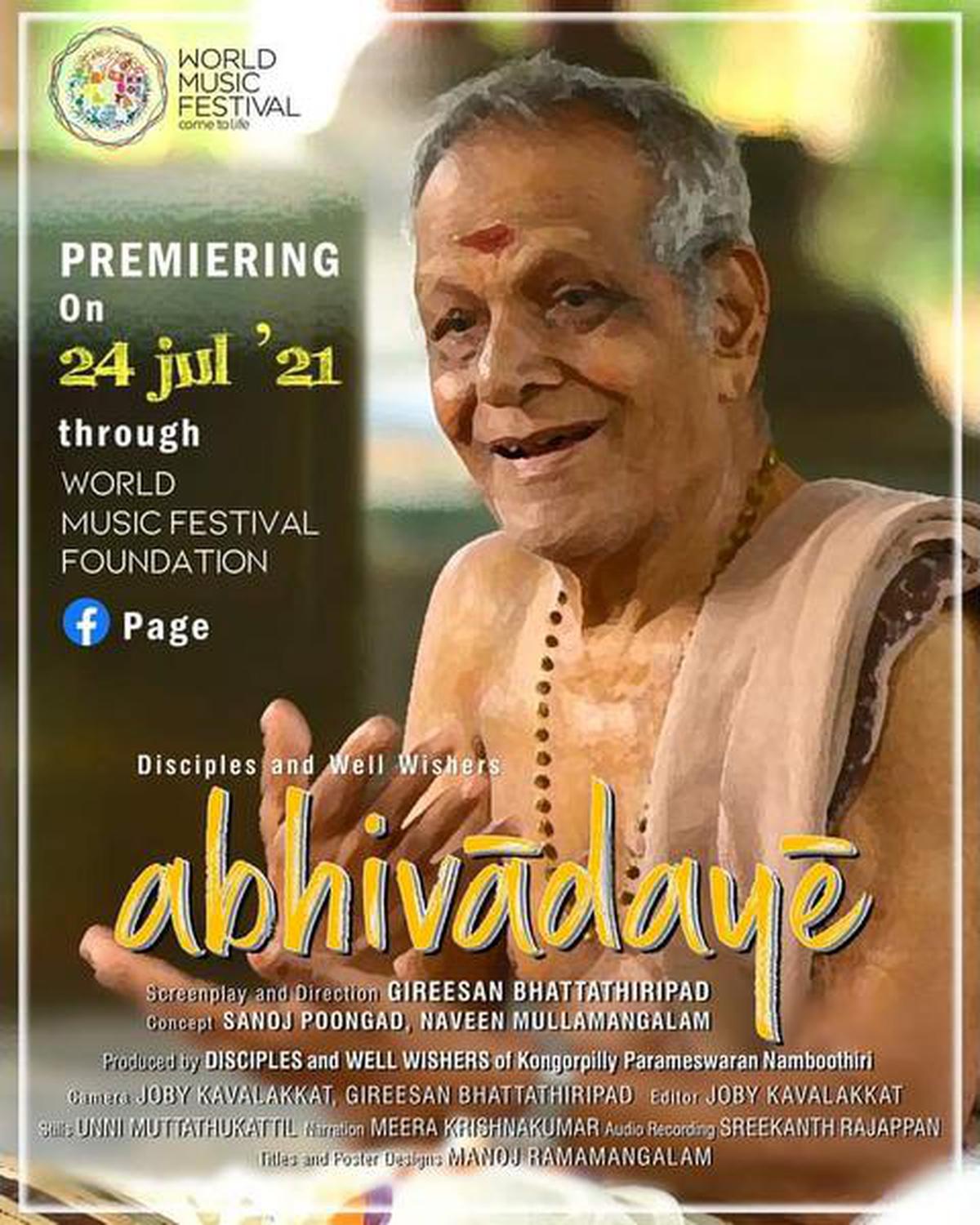 Poster of the documentary by Gireesan Bhattathiripad

While talking about the documentary, Gireesan said that he didn’t rely much on the script. “I just wanted the camera to follow him as he savoured the experience of travelling back in time. When we went to Poomully Mana and Chembai gramam (village) in 2018-19, Parameswaran was overcome with emotion. It was, to him, an awakening of memories that he holds close to his heart,” says Gireesan.

Parameswaran is one of the few artistes in Kerala who has performed the ‘nila sadhakam’— a practice of performing through the night, for 27 nights, seven times. And during the long years that he spent in Chennai, Parameswaran played for many veteran musicians. But once he went to Kerala to join Akashvani in Thrissur, he withdrew from stage performances. His only concert after joining AIR was on the inaugural day, when he performed with Chembai. Even though he was not performing for concerts, Parameswaran continued to teach and organise the Chembai music festival, handling everything from co-ordinating with artistes to planning their itinerary and managing other logistics.

When the idea to make a film on Parameswaran was first mooted by his disciples, Gireesan took the initiative as his son, Sreehari Bhattathiripad is a student of Sanoj Poongad, a protege of Parameswaran. “The documentary is a mark of respect to a great artiste and a teacher,” Gireesan says.