The artwork is set against the backdrop of a circular canvas that draws one in through complementary patterns in concentric circles akin to a pinwheel: from Saravanan Parasuraman’s series, Efflorescence.

Similar But Not The Same is a diary of contrasts, by artists who are part of Kinetics Artists’ Group, a collective of alumni from the Government College of Arts, Egmore. As the title suggests, the exhibition emphasises the importance of individuality — even when concepts seem similar, each has its own latent quality.

And so, works scream similar traits, though each artist’s style is different. “We are from different batches. In 2007 we decided to show together and since then we have been showing regularly. It started with five members, and we are now at nine members,” says Kumaresan. It was late artist and their senior Srinivas who first gave shape to this particular concept, he adds. The show attempts to honour him; Saravanan Parasuraman, one of the showing artists, wished to resurrect this concept. “Every individual shows a specific quality. But together, people share certain common traits — in terms of strength, social structure or education for instance. Even in their differences, people are similar,” explains Gurunathan Govindan, a participating artist whose six abstract canvases are a collage of colours and textures.

To mix pigments, Gurunathan uses cloth instead of a palette that lets him explore the endless possibilities of each colour. Each of his canvases tells the story of an everyday instance. Of his untitled work, that relies heavily on pastel shades, he says, “I had taken my brother’s children to an ice cream shop. The childrens’ joy and excitement on seeing the ice cream, its colours and the options they have, stirred something in me. Everything from molten ice cream dripping on their shirts and their mouths, to the beauty and happiness in that moment is what I wanted to capture,” says Gurunathan. 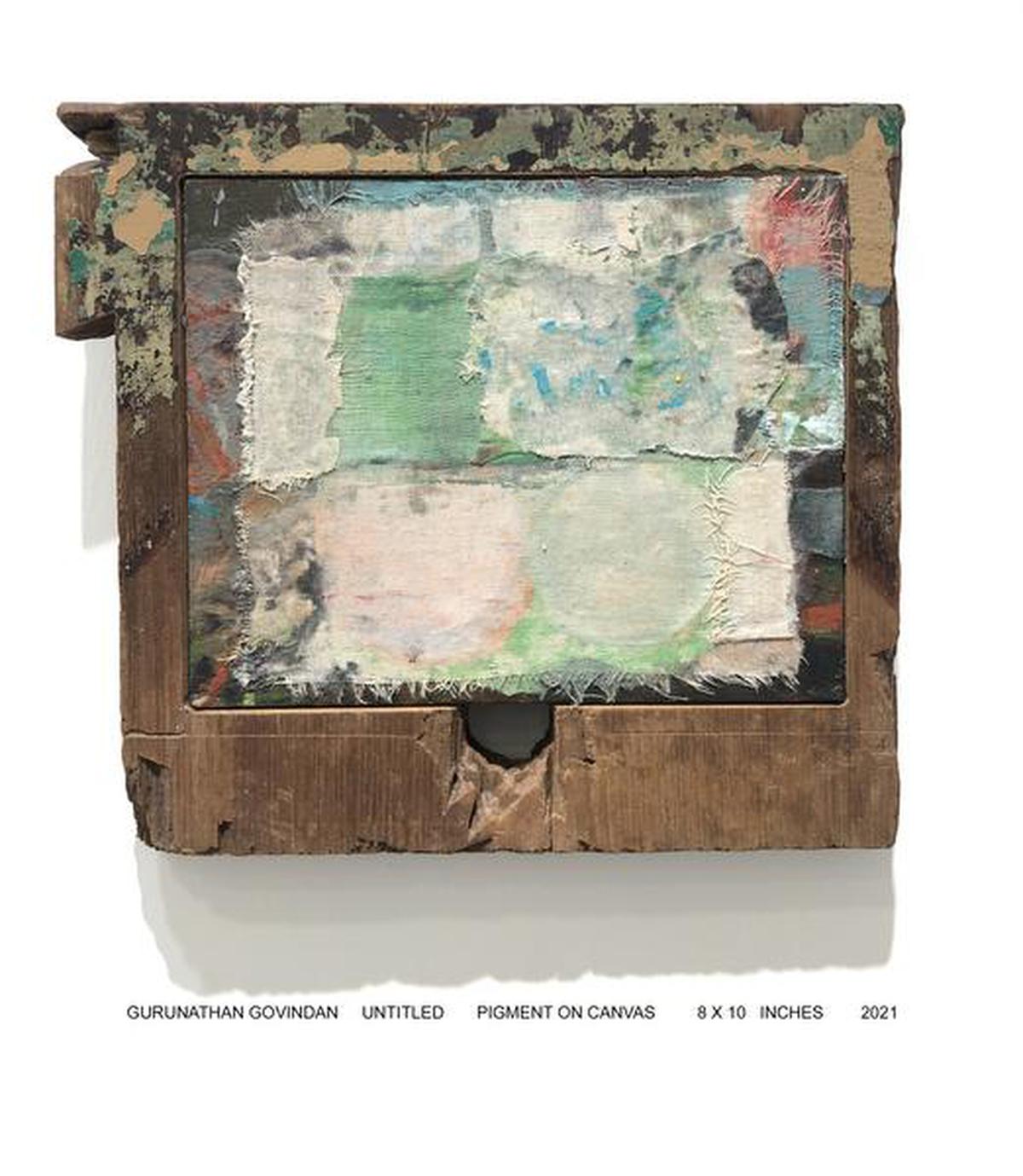 The space, divided in multiple rooms and sections, is an amalgam of dizzying canvases and geometric installations.

Aneesh Kalode Rajan’s work titled Traces follows a trail of birds, by capturing their different journeys and dimensions. The artist has a series of photorealistic paintings (acrylic on board) that sport impressive, minute details: from shadows that line cracked, rocky terrain to the lines that run across faces bogged down by fatigue. Yuvaraj Velu’s introspective works play with wood: be it Integrated Thoughts, a maze of small wooden blocks in brown, black and white, or Mind, another pinwheel that houses wooden patterns in concentric circles (stare into it for a few minutes straight to experience its illusionary quality).

Gurunathan explains further, “If you look at Saravanan’s recent works, an endlessness and the sense of motion can be seen. Yuvan [Bothysathuvar] on the other hand plays a lot with paper strips, ribbons and posters to create illusions.”

Dilip Kumar Kesavan’s canvases are an abstract celebration of colours, rather bright. And Sunil Sree’s Resources is a collection that explores negative spaces through black and white. While one is an installation, which protrudes out of the wall, the other shows strokes and amorphous shapes in black over white canvases. Whereas Suresh Kumar P follows linear strips of colours to create works by placing paper on wood. With the show, the group has also launched Kinetics Arts Foundation, a platform that will help budding, young artists to find their footing through residencies and workshops in educational institutions. “What connected all of us was art. The work speaks for the artist. And so, we don’t believe in the distinction between seniors and juniors. We wish to take this mentality foward,” concludes Gurunathan.

Similar But Not The Same will be on display till October 15 at Gallery Veda, Nungambakkam