A vampire flying frog sticks its tongue out from a labyrinth of what appear to be creepers. Did you know that as tadpoles, this species has ‘fangs’? This is also from where they get their name.

But here, the critically endangered frog, web of creepers, and bed of green it perches on, are all made of paper. It is one of the creations from a handmade, pop-up book that dedicates its pages to 30 critically endangered species. On the spine of this colourful book are the words: ‘My Friends are Missing’. Once open, the combination of thick and thin-cut pages seamlessly morph into shapes and forms of flora and fauna — some recognisable, while others, not so much.

Made in 30 days by Chennai-based design researcher and paper artist, Keerthana Ramesh, the book invites readers to understand the behaviour of critically endangered species like the marine otter, staghorn coral, Antiguan racer and many more.

It wouldn’t be wrong to call this a lockdown project, Keerthana says. It began with a 30-day Instagram art challenge posed by One Million One Month, a non-profit art project to raise awareness about endangered species. They sent out a list of critically endangered species. “It seemed like a good time to revisit the obsession with pop-ups that I had during my undergraduate years. Moreover, it seemed like the right project to learn more about wilderness and Nature,” says Keerthana adding, “Another intention was to learn as many mechanisms as possible.” The project was completed on June 20.

The style used for this book is called papercut, says the artist, explaining, “It’s essentially cutting out small bits of paper using a craft knife.” Papercut art has been made with different kinds of paper, all over the world. : “In Mexico, they have a technique called Papel Picado which uses tissue paper. So, there is really no particular piece of paper that should or shouldn’t be used for papercut art.” 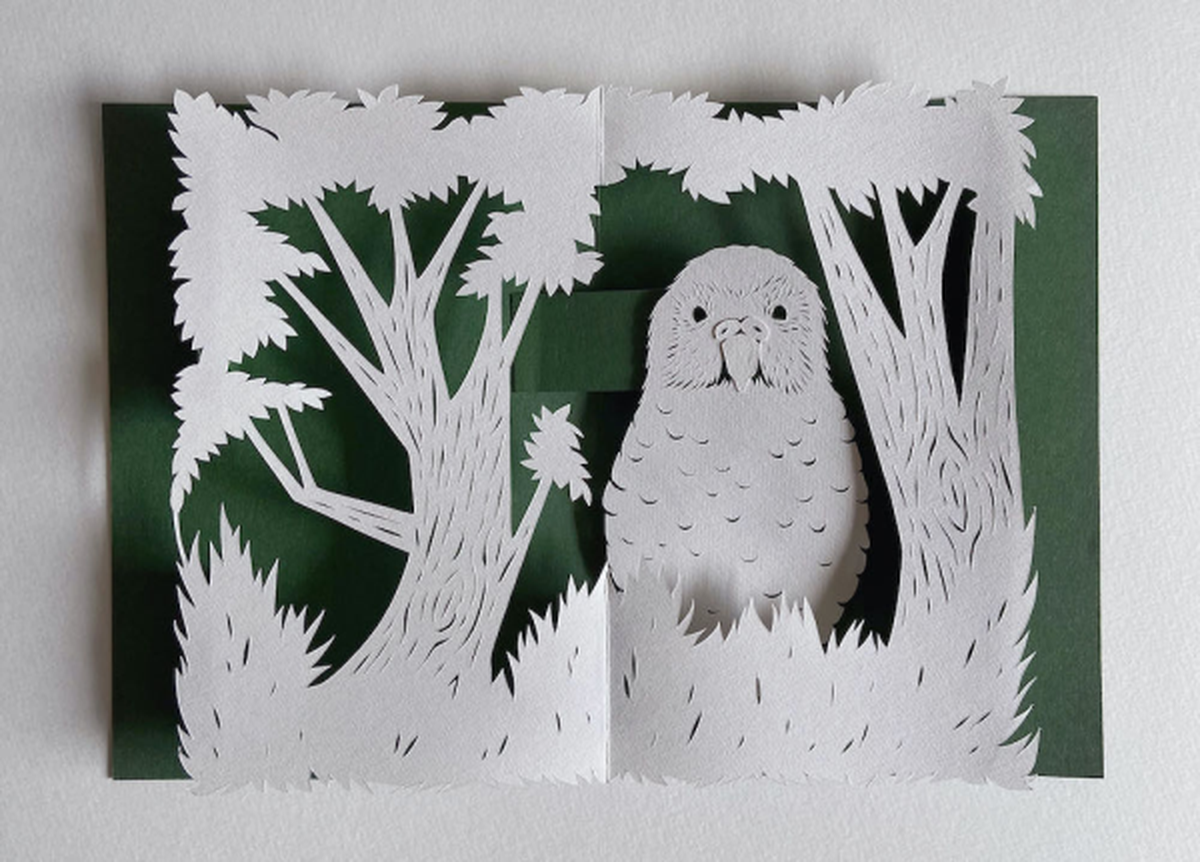 A page from the book that features kakapo, the world’s only flightless parrot

For this book, she set aside five to seven hours a day, mostly at nights, to finish pages in 30 days, including the research for each species. “I had to figure out how they move, so that I could translate the movement into paper. After making prototypes, I cut out the final forms and assembled them into pop-ups,” Keerthana recalls.

While most of the research happened via the Internet, Keerthana dug for documentaries and videos that best explained each of these species’ body language at length.

But the dearth of information on some endangered species posed challenges. “About 50% of the research was very hard to carry out, because many of the animals that are mentioned in the list have not been studied at all. I had very little information to draw from,” she says.

She cites an example: the New Caledonian owlet nightjar. “It is a bird found in the island nation of New Caledonia near New Zealand. There are assumptions that the population size of these birds is about 50 and they are nocturnal, but no one knows for sure. They are so well-hidden that even the local population don’t know that they exist.The only reason it is believed that they are not extinct is because every 10 to 15 years, there is a spotting.” 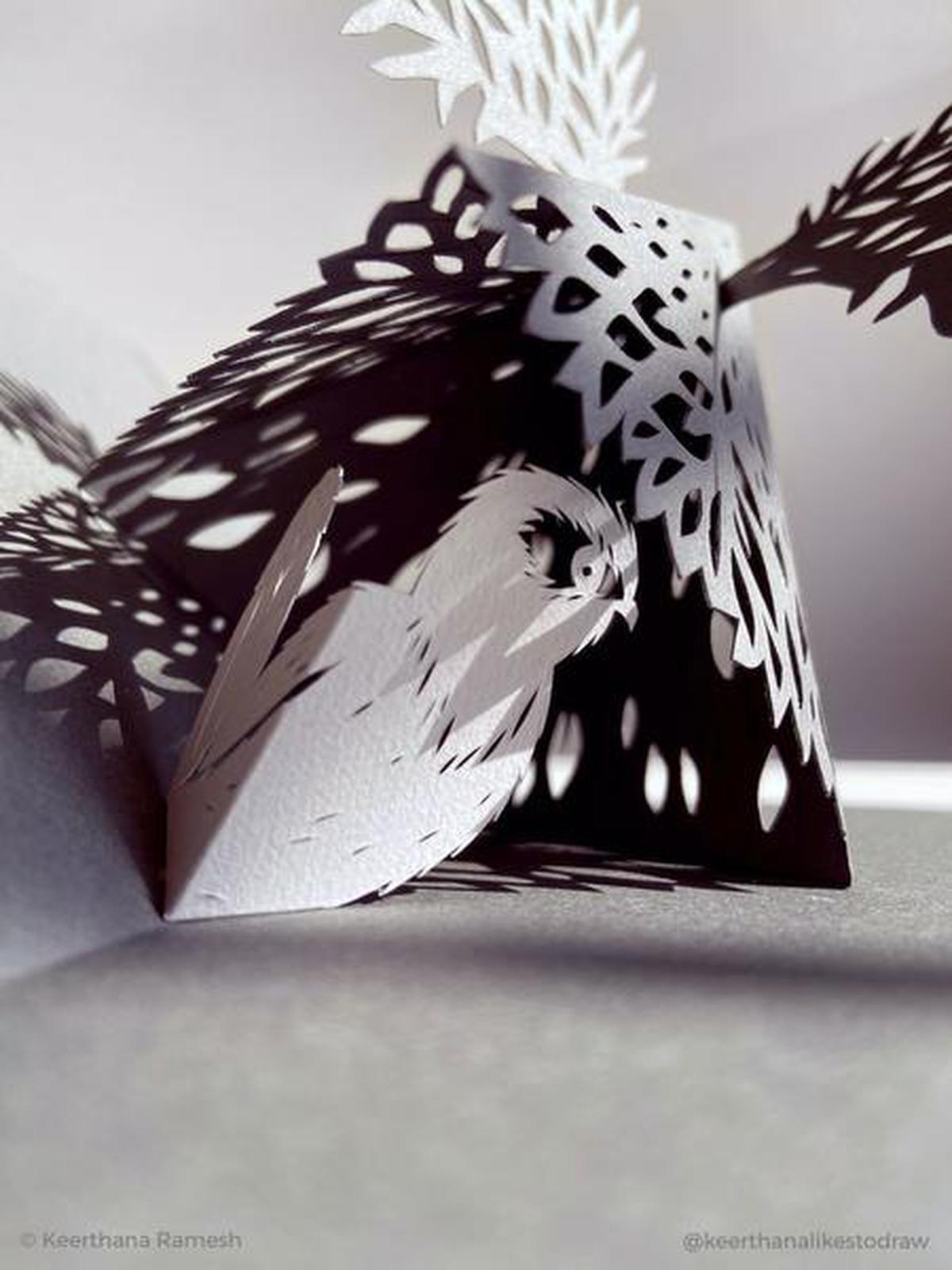 The fact that these birds are hidden away, intrigued Keerthana. Which is why, when the pop-up page first opens, the bird is visible. But once it falls fully open, a mount closes over the bird.

Does paper art such as this have a shelf life? “I tend to use only archival, acid-free paper. Acid-free paper that is meant for art specifically, lasts for 50 to 60 years,” says Keerthana. She is now working on a series of isometric artworks that explore self-identity during isolation, where lacy artwork is created by cutting into a sheet of paper.