The actor’s pregnancy memoir, ‘The Elephant in the Womb’, is filled not just with her poems and rants, but also discusses parenting choices and abortions

The elephant is out of the womb, the room, and gambolled through our chat. Kalki Koechlin brought her book, her trademark vivacity and honesty to our call. Oh, and her uke too. She played us a lullaby in French.

Koechlin is an actor, celebrity, award-winner, activist, writer (Wiki does a better job of this), and a mum. Yet another celeb-turned-author? A-listers have been jumping on the book-writing bandwagon of late — Soha Ali Khan with Kunal Khemu, Karan Johar and Jugal Hansraj… Lots about tots. Why do we need another one?

Burps, lack of libido and incontinence, to start with. This is a book with all the warts and bumps. Koechlin, 37, kept a diary when she was pregnant. Her musings, rants, poetry, cravings, all made it into this memoir (as personal essays and think-pieces), with Valeriya Polyanychko’s brilliant, wacky illustrations focussing on the many versions of Koechlin’s baby bump and other lumps, protesting vaginas and raging breasts.

The Elephant in the Womb is not medical guidance or prescription, says the actor, on a video call for The Hindu Weekend. She calls it the ‘giant experience’ of motherhood. “I wanted everyone to know about the hard parts… and that we’re not alone.”

So read this if, like me, you’re frustrated with balancing the ‘mother-instinct-myth’ on that wobbly high pedestal to which we guiltily cling. Read it because there’s a star who lets us in behind the makeup. She gets real and raw: the beached-whale body, the post-partum slump, the perineal tear, the ‘awe of this new soul’ as well as “the other side… you want your life back”. 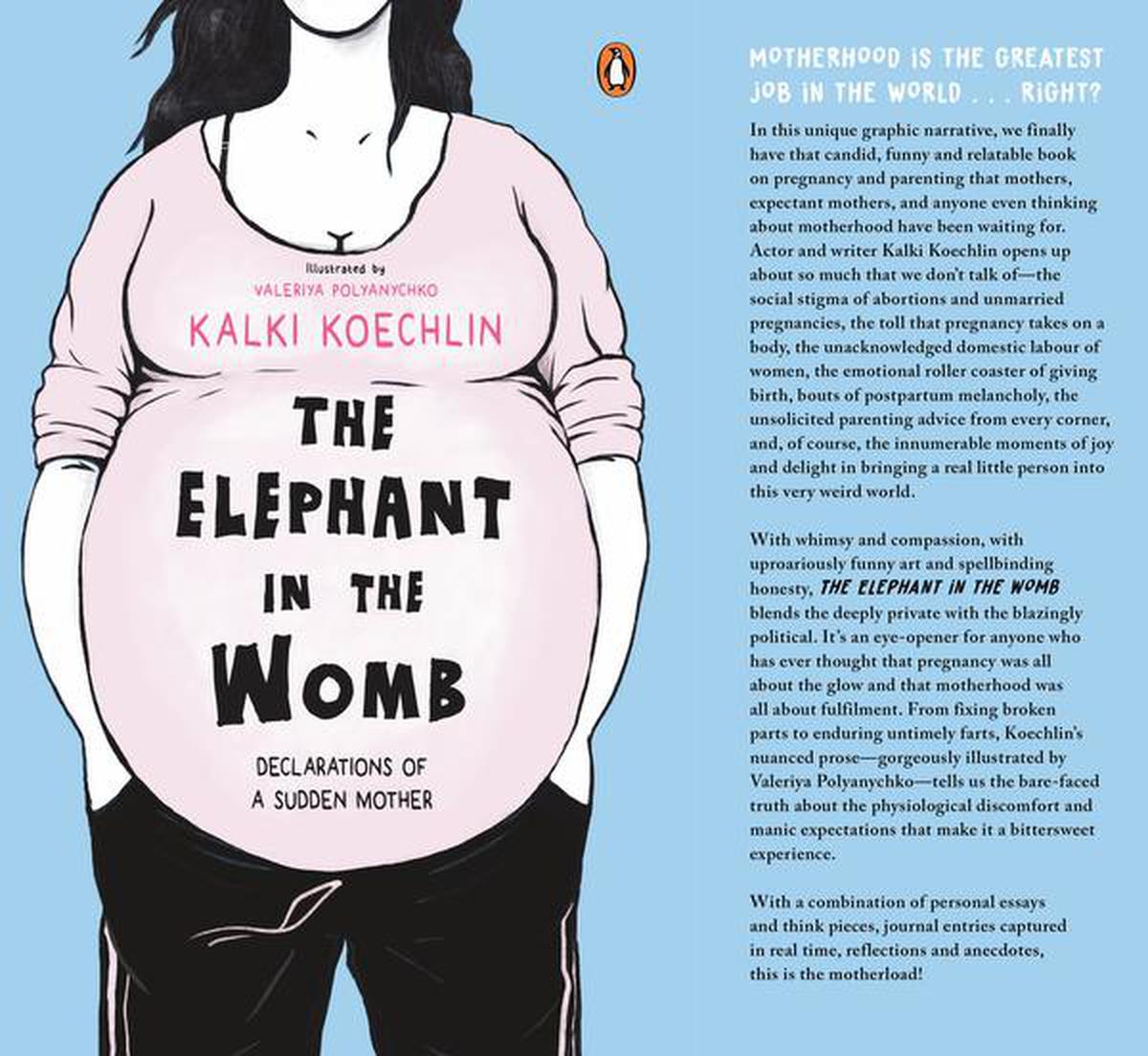 Of abortions and choices

At the risk of irking the fandom, here’s a disclaimer. This book is written from a place of privilege: Koechlin’s words. Don’t expect to have the same experience, don’t even expect to agree with it all. It brings these elephants marching out of the room: the taboos, the forbidden topics, the hush-hush not-polite-conversation. “Most young women in their 20s I know have had an abortion and not talked about it. I understand privacy, but I think you need the support around. When you have a surgery on your knee, you call your family to come and pick you up. When you have an abortion, you come home alone. And that’s tragic,” says Koechlin. Both our chat and the book are about what she advocates widely: choice. Personal freedom. That the woman decides what birth she has — “Shouldn’t she be the one making the decision when she’s risking her life to do it?” — and about how she raises her child. The actor says she chose to follow her mother in the natural birthing process (her maman had three home births), but not in discipline. “I’m trying to sift the good and the bad. My parents were from a generation where it was fine to slap a child. Guy [Hershberg] and I are trying to find other ways to give Sappho [her 20-month-old daughter] discipline. We believe violence leads to violence,” she says. Hershberg, her partner, an Israeli classical musician, has his own hilarious chapter in the book, involving monkeys and dragons — but it’s very much about how different a father’s perspective on parenting is. Or is it?

Finally, acutely aware of not disappointing her multitude of fans, we steered the conversation around to Bollywood. She’s busy shooting again; I asked her about her identity, how she saw herself, and how the film fraternity now sees her. She wishes there were more support. “As a community, if we did talk about our problems with our work people, we’d probably be more productive in the long run,” she says. “Society sees parenting as something done on the side, while actually it’s the centre of humanity, it’s the future generation, the continuation of the species — and it’s sidelined.” As cinema turns to more feminist themes on screen, what about reality? Is someone out there listening? “One day, Sappho can look at this book and know what I went through.” And Koechlin, how your “little flea, wiggly worm, yellow thing” little elephant will trumpet that day.

Published by Penguin Random House India, the book is priced at ₹399 and is available on leading e-commerce sites and book stores.