Taapsee Pannu is on a roll. With new releases and shooting schedules, the actress has had a busy year. Now, Taapsee has announced that she has finished shooting for yet another exciting project. The star, on Tuesday, shared on Instagram that she had wrapped up the shoot of the Mithali Raj biopic, Shabaash Mithu. Taapsee Pannu essays the role of the star cricketer in the much-awaited film. Taapsee shared the bittersweet news of the film wrap with a still from the upcoming movie and added a lovely note. In the image, Taapsee Pannu is seen standing in the player’s gallery of a stadium with teammates, with all of them dressed in Indian jerseys and sharing a laugh.

Along with the image, Taapsee Pannu wrote in Hindi, “8 ki thi jab kisi ne ek sapna dikhaya tha, ki ek din ayega jab cricket sirf gentleman’s game nahi hoga. Humaari bhi ek team hogi, ek pehchaan hogi…“Women in Blue”. Aa rahe hai hum… Jald hi… (I was all of 8 when I was shown the dream of a day when cricket would cease to be just a Gentleman’s Game. We, too, would have a team; have an identity. “Women in blue”. Here we come.. soon) Shabaash Mithu…IT’S A FILM WRAP!” 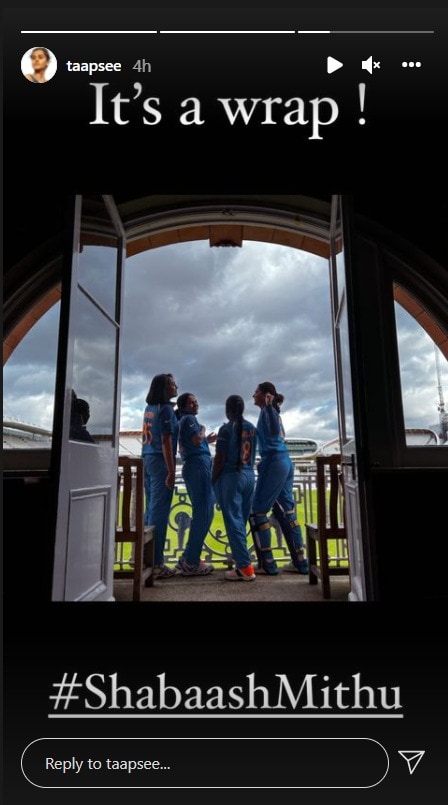 A few hours ago, Taapsee Pannu also wrote about getting ready to be on set. Since she had to report on set in just five hours, the actress chose to sleep in her van. Sharing a photo of her curled up in her vanity van, Taapsee Pannu wrote, “When you have only 5 hours before you get up and report on set, you sleep on set, in your house on wheels.”

Taapsee Pannu, who shot for the last schedule of Shabaash Mithuin London also shared a post on saying goodbye to the city. Confessing that she was positive she would miss London, Taapsee wrote, “Miss my hot coffee in cold London mornings with a home away from home to come back to. Already sure I’m gonna be back soon,” she wrote.

Dressed in a sweatshirt and biker shorts, Taapsee Pannu looked comfortable for her flight back home. But it looks like Taapsee Pannu’s boyfriend, Mathias Boe, who is a professional badminton player from Denmark had other thoughts. He said, “That is not an acceptable airport look.” To this, Taapsee replied, “But I’m wearing a Copenhagen sweatshirt!”

Shabaash Mithu is directed by Srijit Mukherji. The film was earlier being directed by Rahul Dholakia, who had to step aside due to scheduling issues. Taapsee Pannu, who was last seen in Rashmi Rocket, will also be seen in Looop Lapeta, Dobaaraa and Blurr.