There’s a new wave of star kids who are not chasing movie projects. Many of the Gen Z tribe are forging their own path, as influencers, stand-up comics and more

In August, when Aaliyah Kashyap was on the cover of digital magazine, The Voice of Fashion, she wasn’t announcing her entry to Bollywood. The 20-year-old daughter of director Anurag Kashyap is a digital creator. Her lifestyle/fashion/beauty channel on YouTube has close to 93K subscribers, and on Instagram, she has 247K followers. She collaborates with international brands such as Fashion Nova, Lounge and Derma-E. And she’s a student of business management at Chapman University in California.

Nepotism in Bollywood has always been the elephant in the room. Actors with families in the film industry often get a leg up. But like Aaliyah, there’s a growing tribe of star kids today who are not about which movie they are debuting in or where they are partying — they are blazing their own trail. Fitness influencer Krishna Shroff — whose brother, Tiger, went the expected way and is now in the news for Heropanti 2 — tells The Hindu Weekend, “It’s not easy to break away from what my family does. The automatic assumption is that I will do the same. But I wanted to carve out my own niche. To be identified for my vision, and not just my family name, is a huge achievement for me.”

And social media has a big part to play. While some have gone the influencer and model route (Alanna Panday, Alaviaa Jaaferi), others are using their platforms to follow different paths. Navya Naveli Nanda, scion of the Bachchan family, recently launched Project Nyay’ri in collaboration with Pink Legal, a platform for women’s laws. Their aim is to make pro bono legal consultation accessible to women. Aamir Khan’s daughter, Ira’s Agatsu Foundation focusses on mental health awareness. And Jamie Lever has pursued stand-up comedy.

“They [star kids] are very aware that circulating on social media is a must. It’s not the only thing, however, since popularity on these platforms can be short-lived,” says Ankur Pathak, entertainment editor at HuffPost. That said, he theorises that at some point, these large followings could become capital for movie deals. “Not many will turn down an offer from Dharma Productions for the next Student of the Year,” he chuckles.

We meet a few of these trailblazers to find out what makes them tick.

Krishna turned to fitness about five years ago, after a bad breakup. “I needed to prioritise myself and was looking for something transformational. It was motivating to see how far I could push myself physically and emotionally. In fitness, I found discipline, a drive and focus in my life that I did not necessarily have before,” says the 28-year-old, who recently featured in the Nutty® Peanut Butter digital campaign.

Krishna finds that the best thing about living in the public eye is that it “gives you a platform, an automatic following and support”. And while one is putting themselves out there to be judged and criticised, it has made her stronger. “I used to let these outside voices influence me when I was a teenager, but the older I get, the more I use it as fuel to move forward. It’s important to be grateful for this platform, because I realise that a very small percentage of people get to live it,” she adds. As with most fitness accounts, she has “more creeps than trolls”. A thick skin helps block out their comments, she says.

Social media is now a professional space for her, where she collaborates with brands and networks with interesting people. “I’ve also carved a niche for myself and am able to express different types of creativity,” she says. Krishna has appeared on the covers of magazines like Filmfare (ME), Fitlook and The Man. You’ll also find collaborations with the NBA, Zivame and Social Goat among others on her feed.

An avid fan of MMA, she and brother Tiger have set up MMA Matrix, a fitness centre based in Mumbai, with a growing number of franchises across the country. They also use the platform to organize MMA Fight Nights. The sixth edition of the event recently concluded in Dubai.

“I wanted to go by JJ, since my real surname is Janumala. But early in my career, people wanted me to use my association with my father to connect better with my audience,” says Jamie. While the 33-year-old expresses some regret at giving in, she is now happy that she is able to carry on the legacy of clean, family-friendly humour that her father is known for.

She has chosen stage and small screen as her medium. “But it was when the pandemic began that I started seriously building my social media brand. I had about 100K followers back then [now she’s at 809K and counting],” she says, adding that earlier she used Instagram only as a portfolio to showcase her work. Now, she puts out trending Reels, as well as paid partnerships with Cadburys and collaborations with Amazon Prime. “The formats are completely different, and it took me a while to get used to it. The upside is that I get to connect directly with my audience.” She reads all her comments, even the trolls and haters. “I’ve learnt not to engage with them or take it to heart. I understand that Indian audiences can be emotional, and try not to offend their sensibilities,” she says matter-of-factly.

The reach and engagement she has built also takes her work to directors and producers. “After putting myself out there on social media, I have had more job opportunities finding their way to me. Talent managers are looking for those who can create unique content that breaks through the clutter,” she explains. Some of her favourites to follow are @focusedindian (Karan Sonawane), @mostlysane (Prajakta Koli) and @aupmanyu (Abhishek Upmanyu).

Aaliyah’s love for fashion is reflected on her YouTube and Instagram feeds. Her self-styled looks have won her style cred and an identity. “Social media helps me disrupt all that [being reduced to just being someone’s daughter, friend or girlfriend] because here, I am the one who controls the narrative. It’s the most authentic me,” she explained in an interview with The Voice of Fashion. Today, the self-confessed introvert shares glimpses into her personal life (be it snaps with her American boyfriend or impromptu videos with her father. Remember ‘Asking my dad awkward questions’ that went up in June and got over 4.4 lakh views?) and collabs with fashion and lifestyle brands.

Of course, putting herself out there has meant that she is no stranger to controversy — not unlike her father. In February, one of her posts (a photo of her in lingerie) went viral for all the wrong reasons. Following the harassment, trolling and threats, she posted, “I have tried to ignore the harassment and shrug it off, but the truth is that we need to speak about it because these kinds of comments contribute to the rape culture that affects all women…”

The 20-year-old went on to defend her stance, saying, “They are the same men that are fine with following me and consuming the content posted, yet choose to harass me. If you truly disagree with what I post, then you are free to unfollow me. Nothing I do or post is an invitation for sexual assault. Nothing any woman does, ever can be.”

Navya’s work is largely women centric. She’s a UN Women Ally for Generational Equality, “to forward the messaging around sexual and reproductive health and rights”. The 24-year-old also co-founded Aara Health, with the aim of making healthcare (mental and physical) more accessible to women. The online community also shares information on emotional and financial abuse, intimacy and health insurance.

Project Naveli, which she founded in association with Aspire for Her, is a network for women entrepreneurs — or EntrepreNaari, as they call it. The free platform promises “resources, networking opportunities, mentorship, guidance and community support”. Membership has its perks, like free AWS credits and Instamojo discounts. “People like Navya are going to emerge in the world scene in a profound sense and we are all going to be looking at them and saying how proud we are,” Indra Nooyi, former CEO of PepsiCo, recently commented during a panel discussion on Barkha Dutt’s Mojo Story.

The other star kids 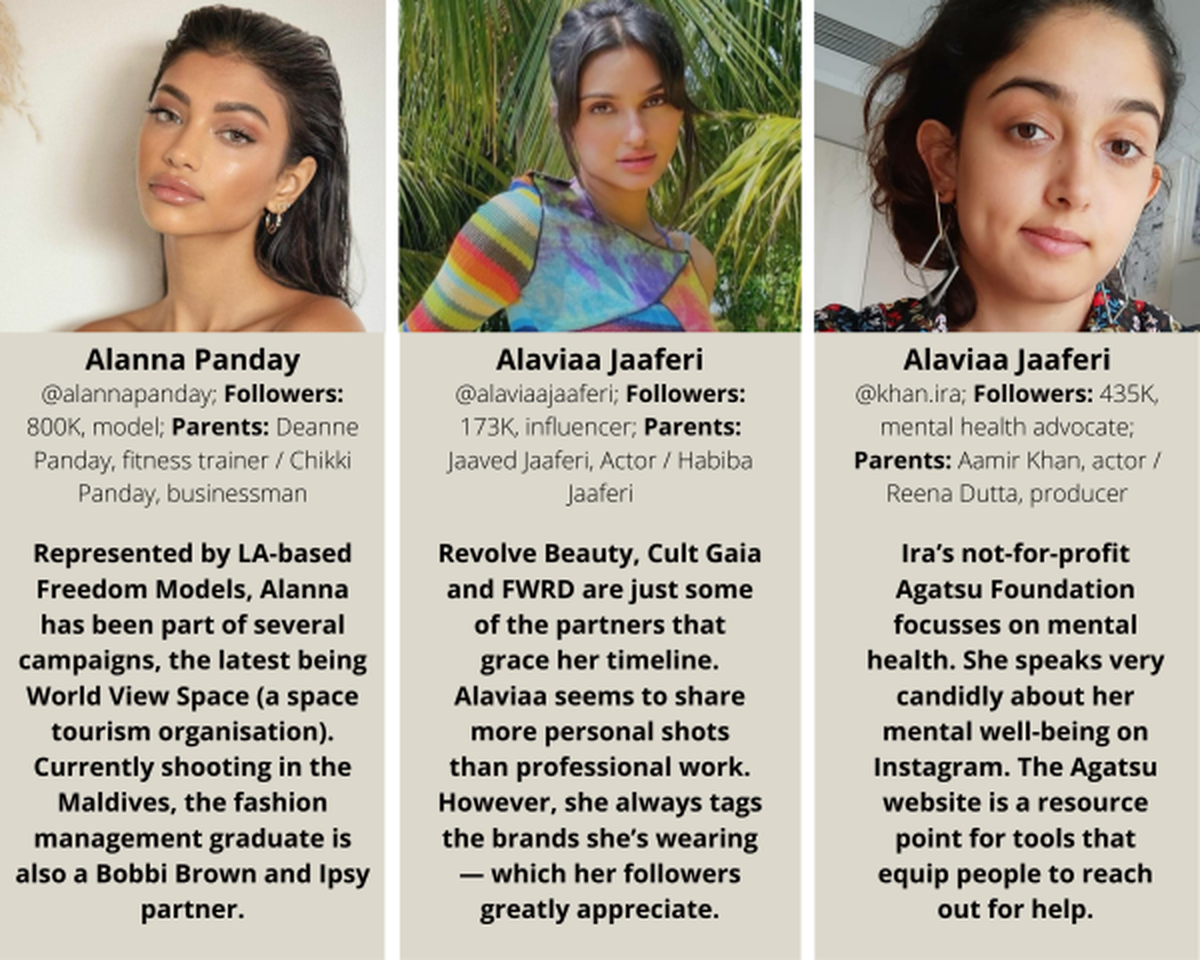 Where are the boys?

While researching this article, we realised that there was a curious trend. As much as Bollywood daughters are curating content and setting Instagram afire, the sons seem to be more lax on this front. Since social media presence is a must for any aspiring actor, those who are launching film careers — like Ahan Shetty (Sajid Nadiadwala’s Tadap) and Karan Deol (who is collaborating with his uncle, Abhay Deol)— are more active in this space.

But others, like Aamir Khan’s son Junaid Khan (who is debuting in Yash Raj Films’ Maharaja this year) can’t be found online. Saif Ali Khan’s son Ibrahim used to be big on Instagram, but has gone off the platform now. Here are some of the boys who have a sizable following owing to their family ties, but who are much more reticent with their posting. 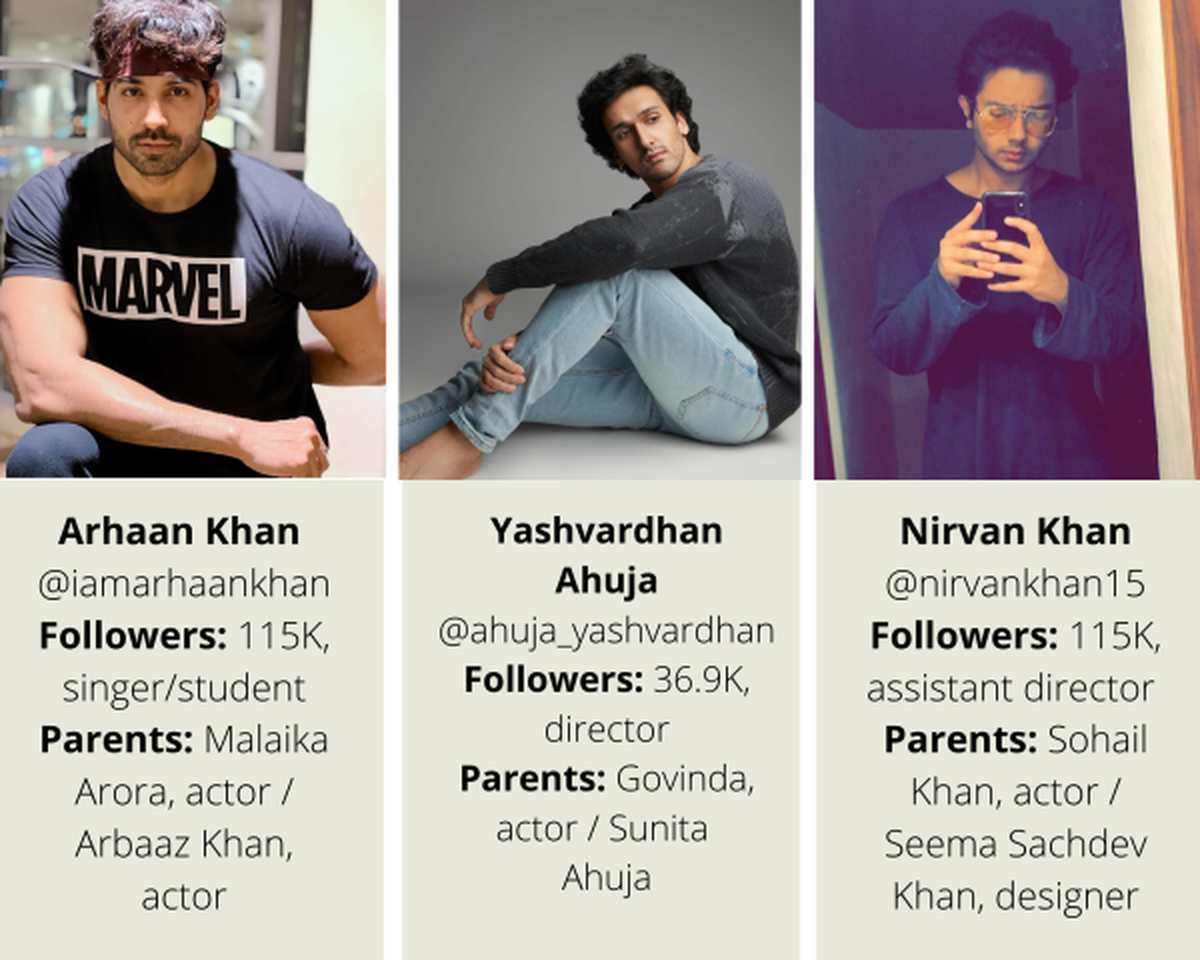 Let’s not forget some of the newer Gen Z who have stepped into the spotlight, following in their parents’ footsteps.

Shanaya is as comfortable behind the camera as she is in front of it. She was assistant director on the set of Janhvi Kapoor starrer, Gunjan Saxena: The Kargil Girl. “My parents were very supportive, as they knew it would give me an insight into their world,” says the 21-year-old, who is preparing for her Bollywood debut under Karan Johar’s Dharma Production.

Her social feed is fashion forward, as she is, and her go-to mantra is to “keep it real”. The adds that it influences the kind of collaborations she does as well. Her latest is with Naturali, a nature-inspired skincare brand. She’s also part of designer Ritu Kumar’s #LabelSquad, the face of Hazoorilal Jewellers and has paid partnerships with Misfit by boat. 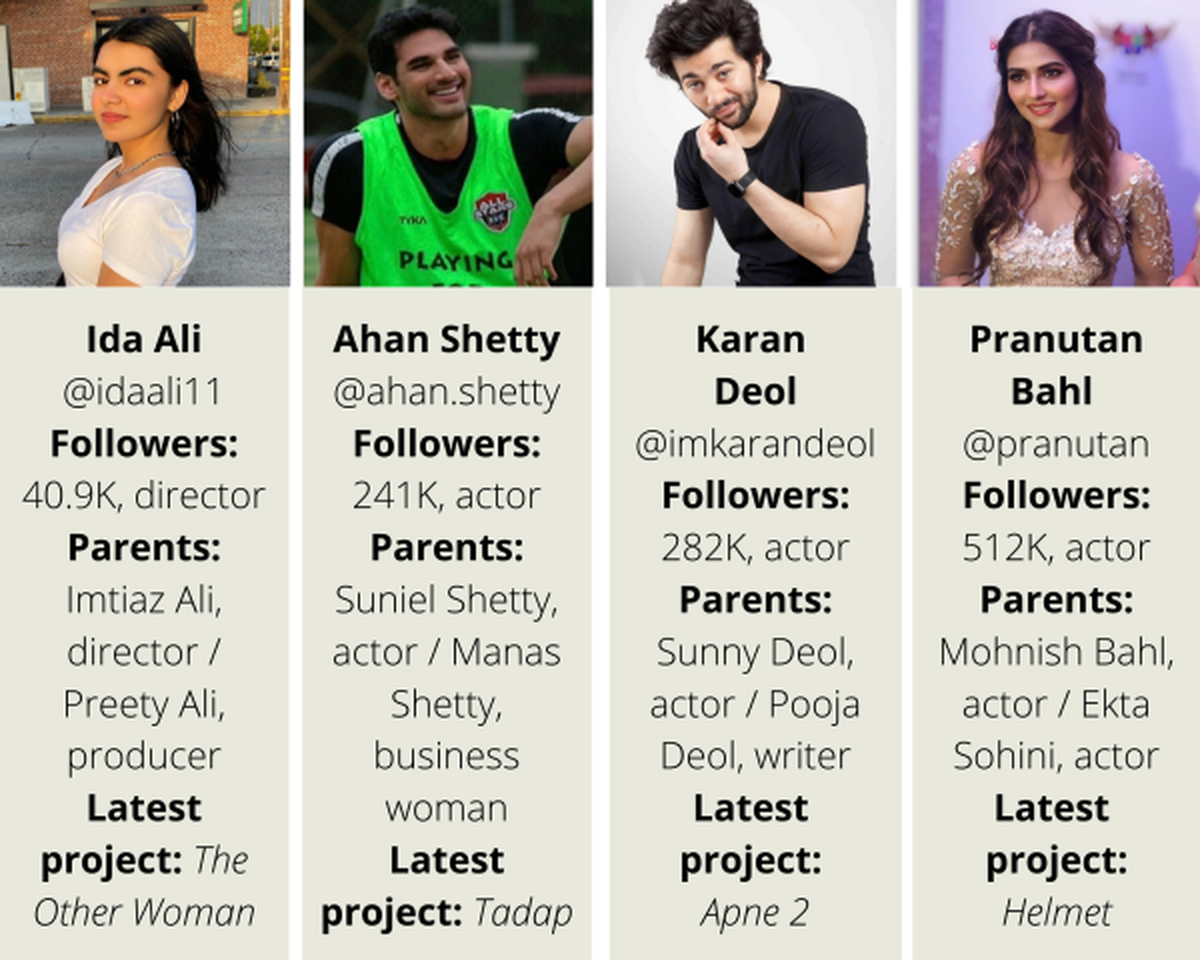