Rooftop terracotta tiles, pieces of wood from dismantled furniture, the leather used to make footwear and musical instruments, and recycled saris are some of the media on which emerging artists give wings to their thoughts in the 12th edition of ‘Emerging Palettes’ hosted by Hyderabad’s Shrishti Art Gallery. Twelve artists from across the country, bound by their love for art, put forth their socio-political and ecological concerns. These artworks are not necessarily intended to be pieces of decor, but can be conversation starters, narrating stories of communities, urbanisation and gender sensitivity.

Stories on saris: Jayeeta Chatterjee depicts repetitive everyday chores of women, combining Bengal’s kantha stitch and woodcut prints. She sources old saris from women of the middle class families she documents, and says the embroidery and print on their own fabric represent the aura of their households. Growing up near Santiniketan, she learnt embroidery from her mother and grandmother. She later learnt printmaking while doing her masters programme in arts: “For this series, I wanted to combine woodcut print technique and embroidery, because many of these women stitch in their daily lives. I experimented combining the two to show the tasks women do in a day, from chopping vegetables to running errands.”

Home and identity: Telangana’s Madhukar Mucharla narrates migration stories by stitching portraits on leather surfaces. He grew up watching his father make footwear and musical instruments from leather and eventually began using it for artistic expression. Madhukar’s work often highlights issues faced by the Dalit community. His large portrait of B R Ambedkar, on leather, was featured in the Kochi-Muziris Biennale 2018. On his calendar series featured at Shrishti, he says, “Migrant workers faced hardships during the beginning of the pandemic. If you look into their homes, you will find images of their deities. The medium (leather) reflects our background and I used it to make portraits of deities Yellamma and Mallana.” The calendar also bears names of construction companies, alluding to the workforce that makes urban real estate projects possible. One image has the words ‘World Cup’, paying homage to migrant workers who lost their lives in Qatar while engaging in construction work for the FIFA World Cup 2022, scheduled to take place in Qatar. All these calendar images, Madhukar reveals, were done to be a part of a larger installation. 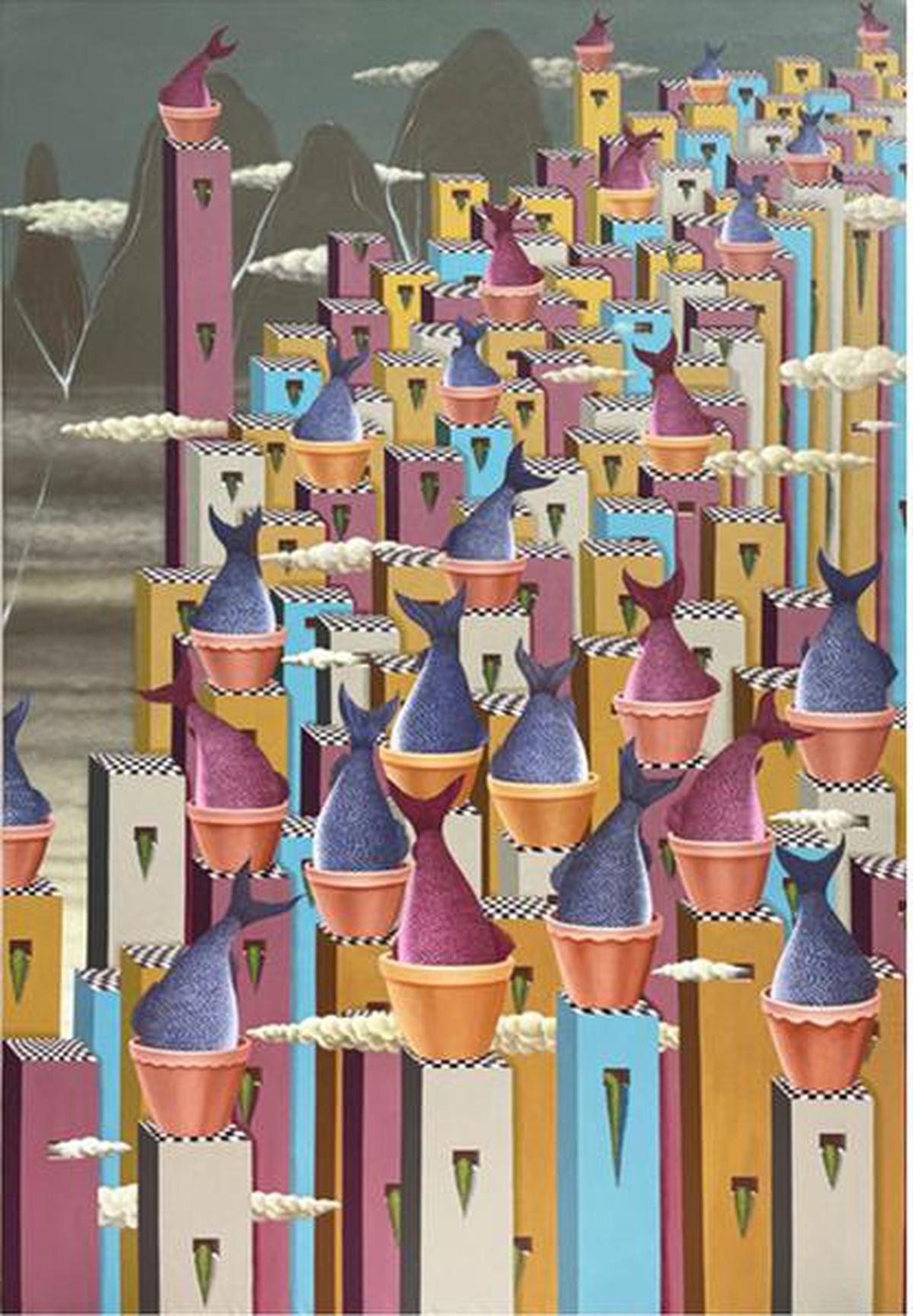 Food on my plate? Jyothiprakash Pradhan, an artist from Odisha who moved to Delhi, was struck by the changes in methods of cultivation — kitchen and terrace gardens as opposed to cultivating produce in large patches of land. In a larger context, he looks at “the manipulation of food”, as he terms it, through an artwork that focuses on biofloc fish farming.

Among the other artworks, Megha Singh’s criss-cross patterns tell the story of modern Hyderabad where flyovers, fast lanes and foot-over bridges have transformed the landscape. Vishnupriyan K’s artwork titled ‘Small is bigger than small’ has him painting landscapes on broken tiles of rooftops, following a miniature painting style, and mounting them on larger tiles, drawing attention to unfulfilled dreams. 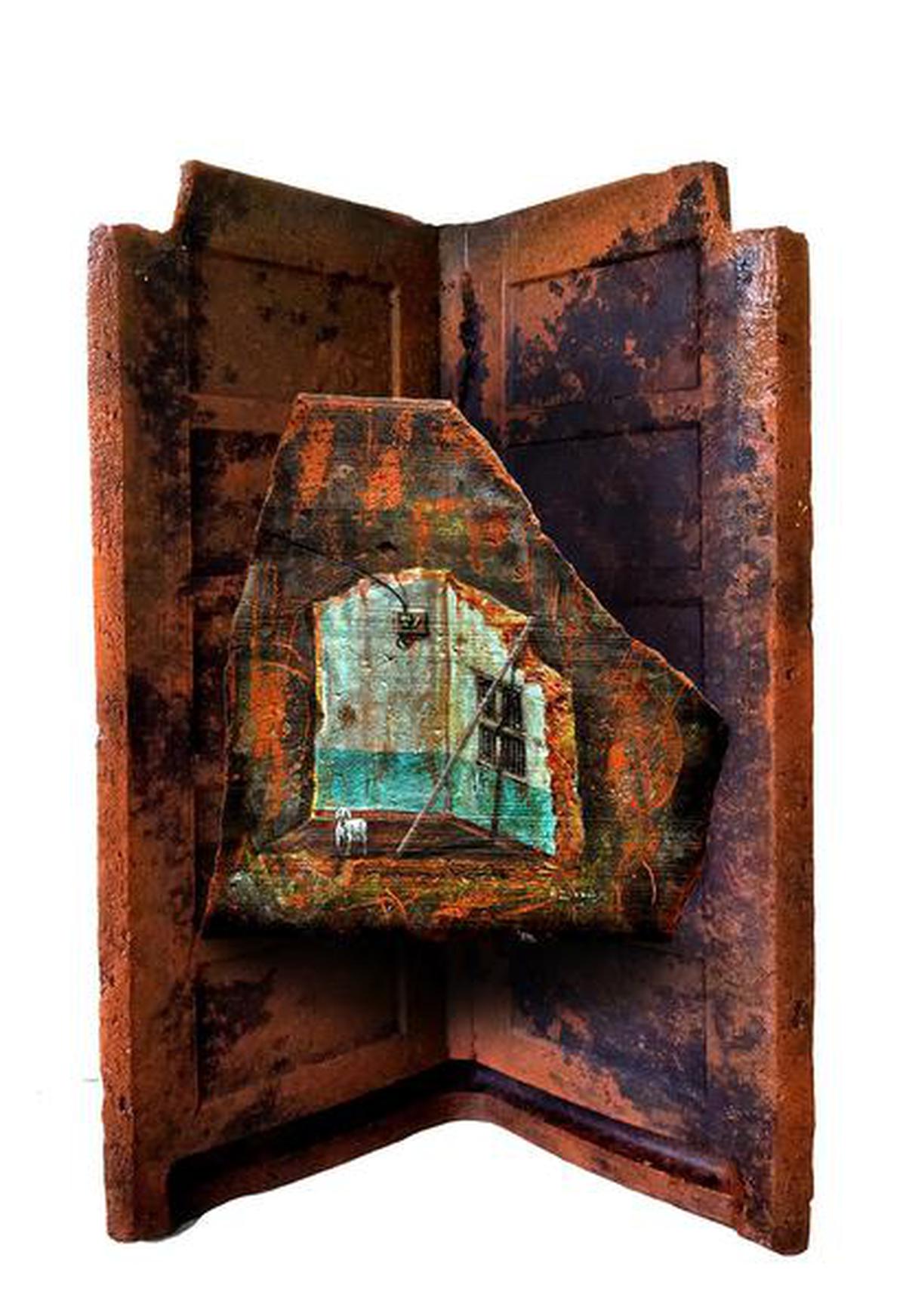 Sunny Lakra uses found objects such as wood pieces from dismantled furniture and iron objects to arrive at intriguing sculptures.

Rohan V Anvekar’s artwork looks at the ecological ramifications of urbanisation through distorted forms, while Anil Kumar comments on urbanisation and consumerism through abstract human forms. Unusual forms mounted on animals become a tool for Abin Sreedharan to discuss the relationship between humans and nature. Gayatri Halder looks at the exploitation of nature through a mosaic of patterns created by piercing fine needles on paper.