To be held from October 25 to 27, the event will be the first art show in the city since the pandemic began

From themes of landscapes, portraits and divinity to the essence of impermanence, and shades of solitude, the works of about 90 artists from across Andhra Pradesh will be displayed at the art festival being organised in Visakhapatnam from October 25 to 27. Planned at the heritage site of Hawa Mahal overlooking the Bay of Bengal, the event will be the first art show since the pandemic began.

“The show aims to revive the fine arts market by providing a platform to celebrate art once again at the physical realm,” says Ravi Kattakuri, artist and curator of the show. “Through the pandemic, many artists explored the digital medium of exhibiting their works and showed the world that art can stand up in the face of adversities. But the connect and engagement between art connoisseurs and artists were largely missing. This is something that physical art shows foster,” adds Ravi.

The four-day art festival is being supported by Mayank Kumari of Hawa Mahal. It will feature works of some prominent artists like G Ravinder Reddy, V Ramesh and Bothsa Venkat alongside others, including 27 fine art students.

Known for his portraiture, artist Naresh Mahanta has for the first time experimented with a bigger series on landscape works in water colour medium. One of his works titled seascape depicting a sunset scene of R.K. beach will be displayed at the show. “During the pandemic, I could get the space and time to reflect on mediums and themes that I have been wanting to explore for a long time. In my recent works, I have tried to capture the beauty of Visakhapatnam through my watercolour works,” says the artist who is working on a bigger series on landscape for a solo show.

The art show will also see sculptures, graphics works and photographs of artists from Vijayawada, Kadapa apart from Visakhapatnam.

While the pandemic was tough on artists, it permeated through the works as well. “The pandemic, I feel, has had a telling effect and manifested in a dark toned choice of palette in my works. I found myself gravitating towards shades of brown. Guided by this uncharacteristic affinity, I sought suitable subject matter, engaged with portraiture in our Indian skin hues,” says artist Anita Rao, who is pursuing her Bachelors in Fine Arts from Andhra University. Anita’s inclusions in the exhibition are A3-sized earthy portraits, which are meant to bring cheer to the viewer- a joyous farmer (another deliberate choice of subject) and a young boy who just emerged from a dip.

Artist Sharmla Karri will be displaying her work titled ‘Divinity’ at the show – a reflection of the forest Goddess Aranyani Devi. “A couple of years ago, when when I read about ‘Aranyani Devi’ a forgotten goddess, I wanted to put it on the canvas. One of the most descriptive hymns in Rigveda is dedicated to her where she is described as beautiful, shy and fond of the quiet glades, a protector of the forests and all that dwells within it,” says Sharmla. Intrigued by the beauty, the artist made a series of paintings on theme. “It’s an ongoing series that I keep working on,” she says. 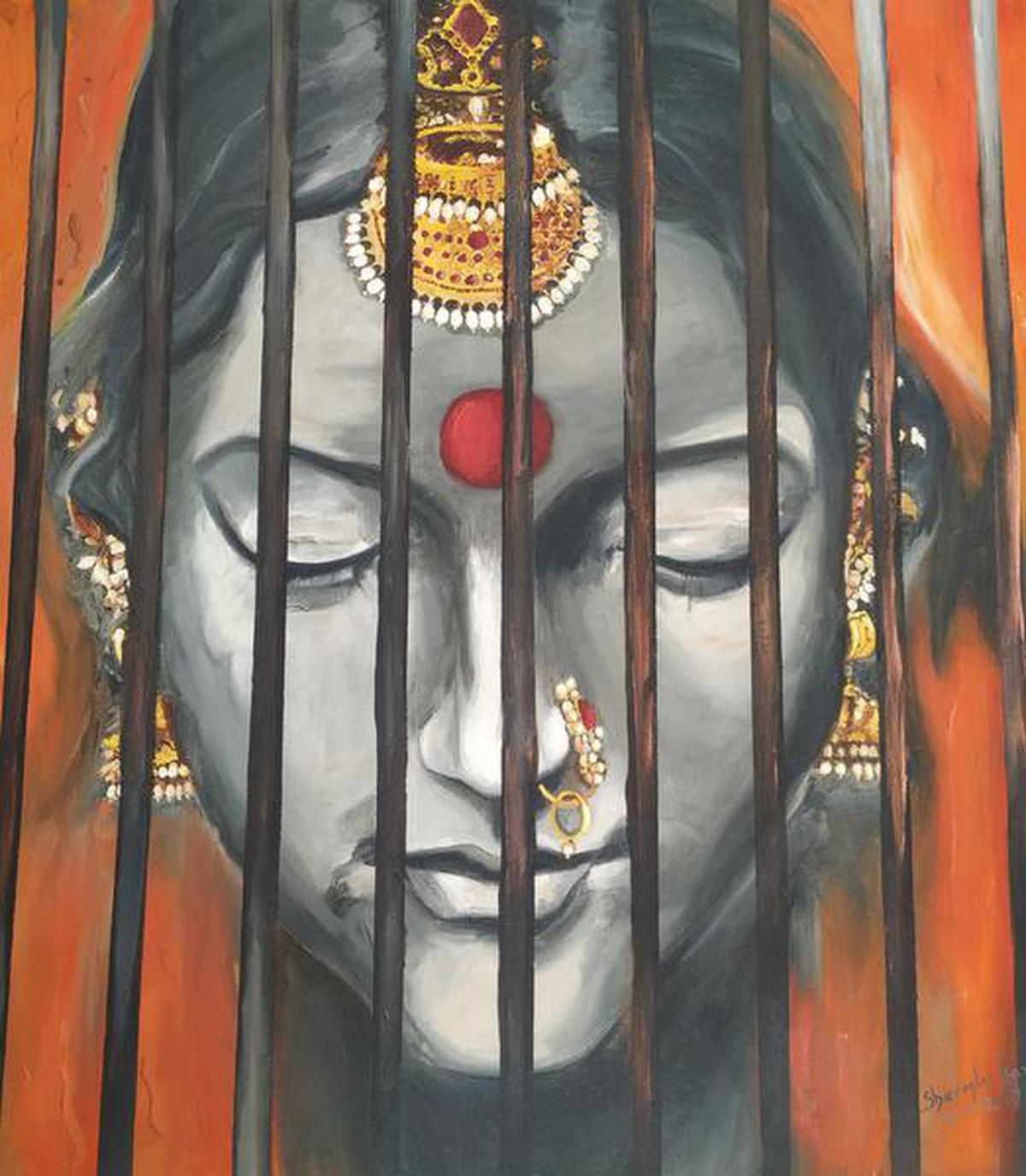 Sharmla feels the challenges of the pandemic offered valuable lessons. “One thing that I realised while adjusting to the new normal is that even with a limited palette, there was so much to explore. Earlier, it wouldn’t ever have occurred to me that I could paint on a broken cement tile or a rolling pin for that matter. And the best part is hearing so many heartening stories like artists displaying their artworks on the windows facing the streets in New York,” she says.